Our school building is 80 years old! 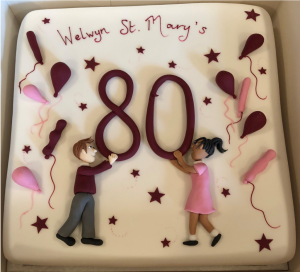 We had a special assembly to celebrate, to the day, when the foundation stone of this building was laid by the then Bishop of St Albans on 29th April 1939. As you may well know this building was initially a secondary school until 1968. The junior children and staff then moved over from the Victorian building on the London Road followed by the infants in 1985 when the Victorian building was sold. Some Year 5 children had researched what else happened in 1939 including the outbreak of WW2, Siam changing its name to Thailand and the birth of Tina Turner and the Beano. We lit candles on a giant cake from Katie’s bakery which was later shared by all to celebrate the anniversary and to say well done to all for the excellent inspection result at the end of last term. It was a very well deserved treat.