Before half term, our year 6 archers took part in a second qualifier to finalise our team.

The children below will now have another opportunity to have nine arrows to score a maximum of 90 points.  The scores they get next, will then be sent on to the event organiser to collate and finalise the top archers in the county.

Of those who took part from the boys, Josh came first with an amazing 78 points,  Khian second with 73, Riley third with 66 and taking the final spot in fourth, Ethan with 65.  For the girls, Jess scored an impressive 79 and took first place.   Amber coming second with 73, Poppy third with 54 and Annelise fourth with 53.  It was very close between everyone; the other children only missing out by one or two points.   Well done to everyone who took part and congratulations to those who qualified. 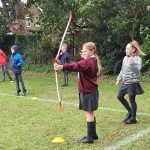 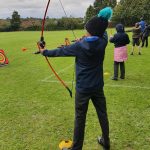 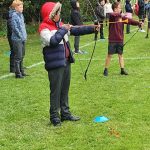 A bonus for those who were slightly disappointed about not qualifying; we will be organising two additional competitions.   A summer county competition and an inter-house competition where we will be finding out which house has the best archers.