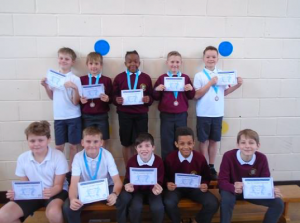 Towards the end of term, our boys’ football team walked over to Monk’s Walk to compete in the district tournament. The competition was split into two pools for the winner and runners-up of each pool to qualify for the semi-finals. After three games, Welwyn St Mary’s had drawn all three. We needed a win in the final game in order to qualify. With some fantastic, free flowing football goals were flying in. Welwyn St Mary’s won the game 3 – 1. We unfortunately lost the semi-finals on penalties but still had a play-off to determine third and fourth place. We won this match against Harwood Hill 1 – 0 and so took third place overall. The team was, Thomas, Harry, Luke, Louie, Holi, James, Charlie, Stanley, Presley, and Luca. Well done!